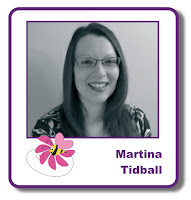 Good morning all! Autumn has snuck in around us and we have no excuse not to be thinking about Christmas cards now! I know, time flies and all that, but I do love autumn don't you?

I have been crafting with my friend Daryl again from the Hobby Art Daryl the Quirky Turkey Set. There are lots of different sizes and poses with Daryl, so there is plenty of choice for you to play with. Usually when I start with a new stamp set, I have some ideas with which to work with, but these don't always turn out the way I envisage! Often I find it helpful to make some 'mock-up' designs on some copier paper so that I can practise positioning etc. before I take the plunge. Not all the designs make 'the cut' but sometimes new ones come from the playing! (excuse the mess on my desk!) 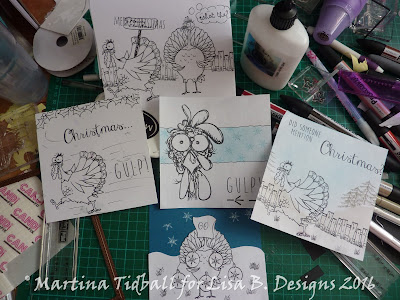 For my post this week, I have chosen to use a card I made using the Daryl that I think looks totally stunned!  I started by stamping the image onto the correct size of topper I needed (after allowing for the matts and layers I was going to use). I used Tuxedo Black Memento Ink and then coloured the image with my Promarkers. Once I was happy with my colouring, I cut away the top section of the card from the image. I cut freehand along a wavy line which created a snowy hill. I could have just cut Daryl out and stuck him in front I suppose, but I am not a fan of fiddly cutting... 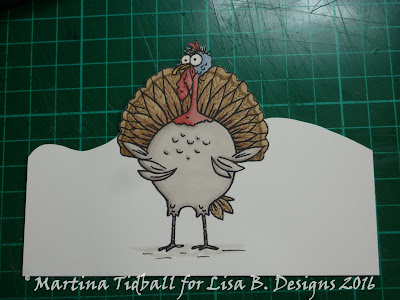 Again measuring the topper size I needed, I used the snowflake stamp from the Daryl set to randomly stamp snowflakes in Versamark Ink all over the 'sky' area. I embossed them with Bright White WOW Embossing Powder. 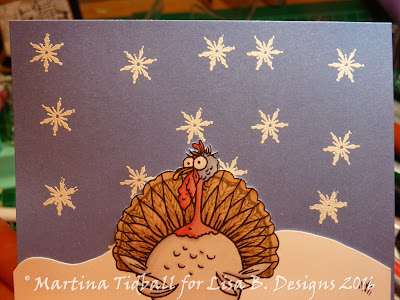 My next step was to create some decorations to 'hang' on Daryl; bear with me, there is a method in the madness! I stamped lots of baubles from the set onto some card and stamped the snowflake from the same set inside them. The smaller baubles came from another Hobby Art set (with the grumpy sheep on!) Once I had coloured the baubles and added some Glossy Accents to the plain ones, I cut them out. 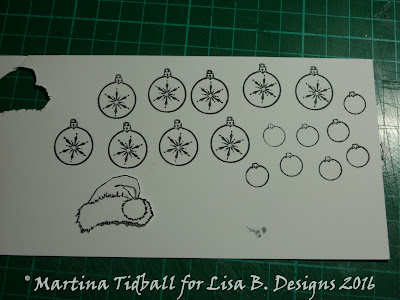 To make the baubles look as though they were hanging on Daryl, I decided not to just stick them on top of him, but to thread them through his feathers (painful, bless him!)
To do this, I pierced a tiny hole using a Crafts Too Pokey Tool through the hanging loop at the top of the baubles. I then threaded some fine thread through a beading needle, up through the back and secured it with some tape. I added a Crafts Too Foam Pad so that the bauble looked 3D. 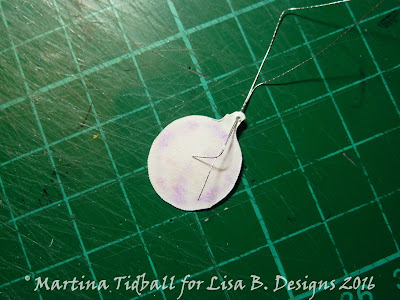 Once I had threaded as many baubles as I wanted onto Daryl, the back of my card was a bit of a mess (a bit like when I have tried cross stitch before: never to be repeated!) As no one was going to see it though, I  could pretend was orderly and perfect... 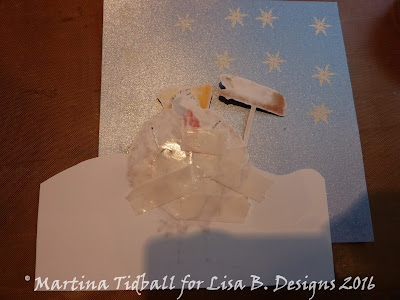 Still looking too much like a turkey, I thought Daryl should have a paper bag over his head (again from the set). Typical really, as I had coloured his head in carefully! I also added his sign, some glitter snow and stamped some of the little grasses onto the front snowy section. 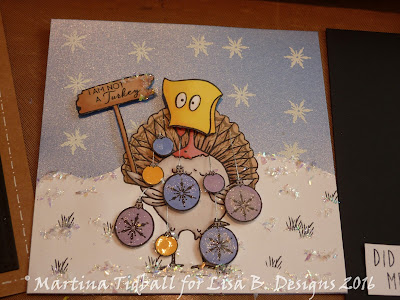 Within the set, there are some 'comedy' type phrases that you can play with. I chose two for my card and added a question mark, so that the card read as I wanted. These were then matted and layered onto some Black Card to make them pop from the main topper. 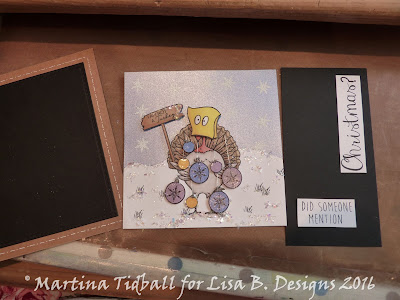 Once all my elements were complete, I was ready to stick them together using Cosmic Shimmer Glue. I added some white faux stitching around the edges to bring it all together. 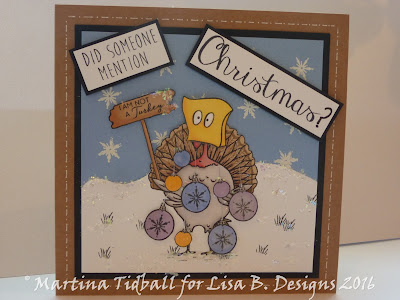 Poor Daryl, I think his feathers give the game away; there's an idea for another card - a multi-coloured psychedelic tail! If you make one, let me know!

That's it from me, happy making and I will share another 'Daryl' card with you next week.