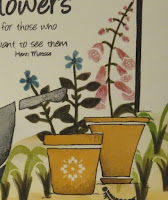 Good morning all, Martina here with my last Card-io card following last month's classes. How strange has the weather been? On Monday I was sweltering in a summer dress whilst inflating paddling pools and now I am sitting in bed socks with a dressing gown on (what a vision!!).

Today's post is a quick one from me, although the card itself took a little longer to make than it should, due to a mistake or two along the way (it was late at night!!)

So, I knew I wanted to make a scene, and this time not a 'pretty, pretty' one. I am not sure about you, but my garden is not always a picture postcard, very often my flowers include some of the 'wild and free' varieties. Inspired by this, I wanted an everyday scene, more realistic, you might say!

My first step was to have a play with some stamps and copy paper. I wanted to experiment with the washing line stamp which is on the Perfect Patch Set, as I had not really used it. I tried different angles and colours until I had an idea with which to run with. 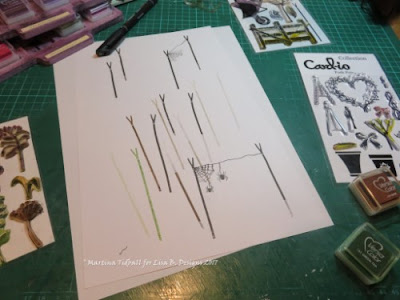 I started to build my scene, adding my washing line and then a wheelbarrow. I used Versacolor Cement and Black Ink for this, with Bark and Black for the washing line. I wanted to add some pots, so I used two of the ones from the Posh Pots Set and stamped with Topaz and Bark this time, masking one to stamp the other behind.
STOP!
Can you see my whoops? Obvious, isn't it? Poo (and all those other words, followed by a biscuit break, or 10). I appear to have balancing, floating, weird-ish pot problems. You just can't get the staff. Be honest: have you done it though?
I did try to save it, but made it worse, so in the bin it went and I started again, dear readers. 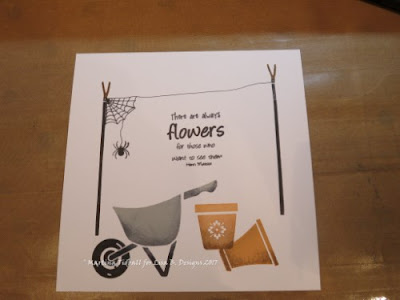 Slightly better this time - I repeated the first stage and then readjusted my pot composition. I used a stamp press to repeat stamp the flowers from the Backyard Blooms Set and colour each part with various Versacolor Inks as I went. I made a mask for the wheelbarrow, which allowed me to stamp foliage around it. The hills were made with torn paper and little brown ink to give a bit of 'grounding' to my scene. 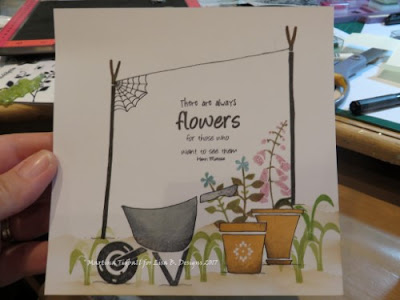 Final touches - some bugs from the Backyard Blooms Set, a little pen detail with a fine liner, some Distress Ink around the edges to bring the eye in and some dashes along the edges. Voila! 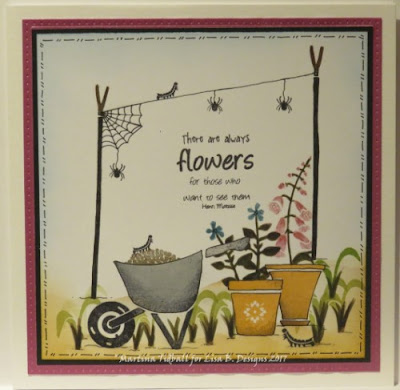