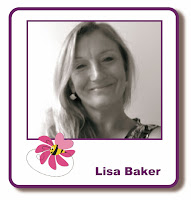 I do hope that you are all well and are keeping yourself warm, hasn't it been cold over the last few days??

Well first of all, can I apologise for my lack of blog posts lately? February was such a hectic month for me with two Hochanda Shows with Imagination Crafts and the spring NEC Trade Show too. My feet barely touched the ground before I was then sorting out my class for last Friday, so I have just had no spare time to make anything else for the blog last month.

I also want to thank our Martina on my DT team who has gone off for a well deserved rest on her maternity leave. I adore what she makes and she is so inspiring and I wish her well with the new arrival. She will be back when she is ready and I along with yourselves will look forward to more of her fabulous work......

So today I thought that I would show you a couple of my makes that were the inspiration for this month's class, using my brand new poppy stencil that was launched at the trade show last month, along with some old favourite background stencils. We were layering with stencils, using stencil paint and then foiling parts of the image with Sparkle Medium......

The initial card for this was one that I demoed on Hochanda on our last Imagination Crafts Show.......

I made the card up front and then decided I would like to show you a tutorial break down on how it was done so that you can have a play at home if you wish......so I made another one and remembered to take photos this time!!!

To begin with, I taped down my stencil using Stencil Tape on to Super Smooth card and got out my Stencil Paints, I used Poppy Red, Lime Green and Meadow Green. 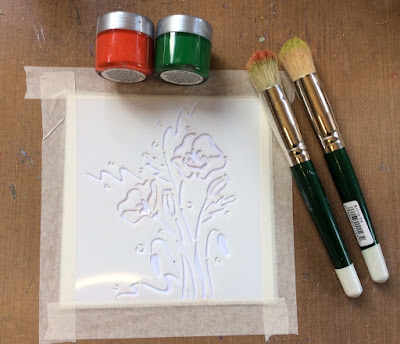 Then using my Stencil Brush I added a small amount of paint to my brush and then stippled the meadow green paint through the stencil on the leaf and stem areas. 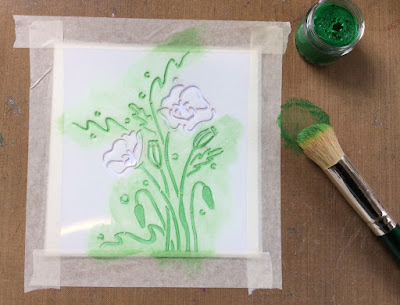 I repeated the same with the Poppy Red on to the poppy heads. ( If you only have one stencil brush you can clean the brush with a baby wipe after the green and then carry on with another colour ) 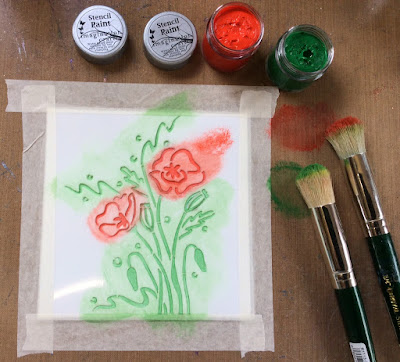 Next I removed the stencil and added a couple of drops of Magi-Blend, (Magi-Blend is a solution that will water down any water based paint to make it more paint-able but will not dilute the pigment colour at all like water would), to a small amount of the poppy red stencil paint and using a small paint brush I painted in the head of the poppies to make them in to a negative image.  I then did the same with the green for the leaves. 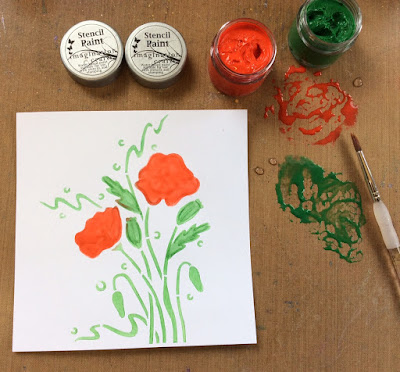 I lined up and replaced my stencil back on the image once it was dry ( it doesn't take too long ) and using a small amount of Sage Green Sparkle Medium and Cut'n'Dry foam I foiled the green parts of the image......

Now when I say foiled you may be saying to yourself how is that done?

The best thing to use is a piece of cut'n'dry foam that you have forgot to wash out and it has gone hard as it creates a much better friction. Apply a small amount to the foam and really work it in to the foam first. Then take it over your stencilled image and rub it in a circular motion. This will friction the glitter and make it foil......There we have it, it is great fun to do and you get some great results. 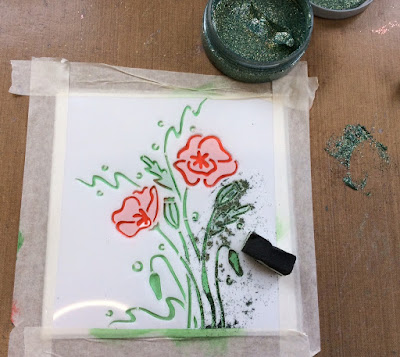 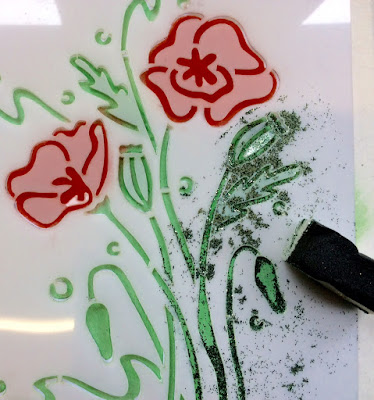 The next step was to do the same thing with the red poppies but with the Light Copper Sparkle Medium this time...... 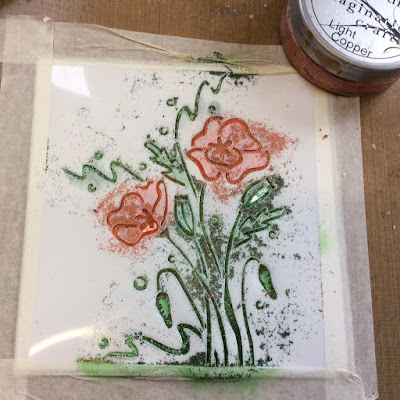 Here is a close up of the foiling, it looks great, doesn't it? 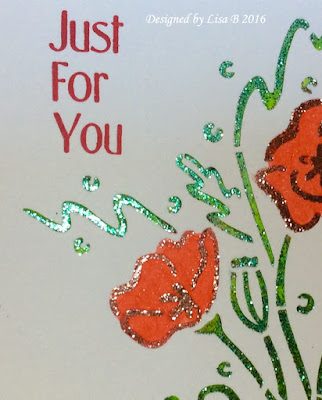 Now we could just leave it there and this would be the end result, which looks pretty fab with a few co  co-ordinating matted layers and a message, but I want to take it on a little further with stencil layering...... 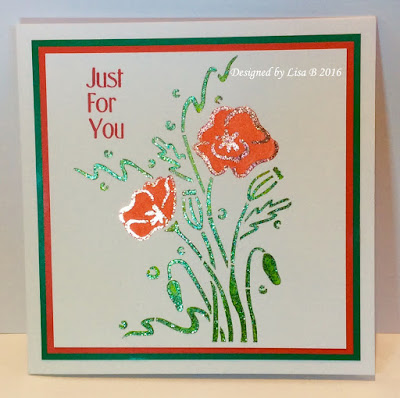 So we are going to put another lovely background stencil Daisy Diamond on top of our foiled image. 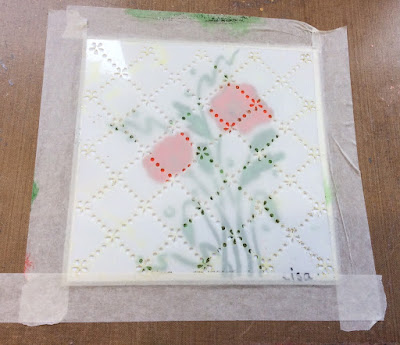 Then I took some Lime Green Stencil Paint and stippled it through the stencil with the Stencil Brush, so that it went around the image to frame it..... 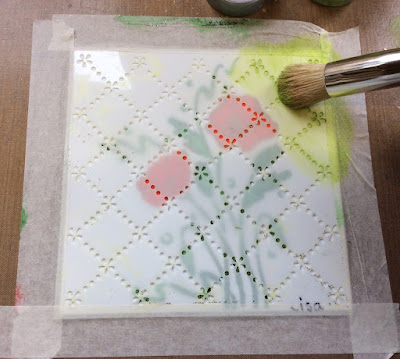 And here you can see I have covered  the whole outside area of the stencil..... 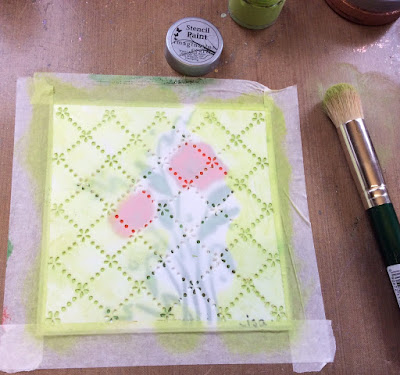 Here is the result, I love the way it frames the image but drops in to the background.... 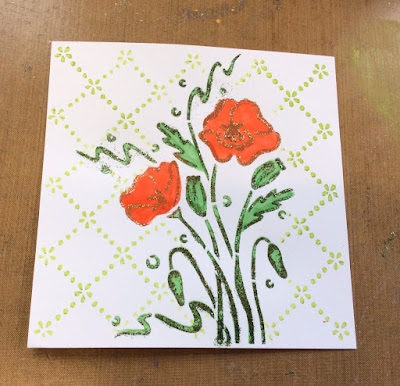 And here it is matted and layered with an added sentiment again........ 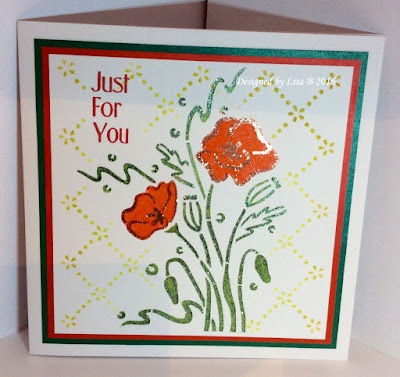 Below is another one using the Diamond Stencil....... 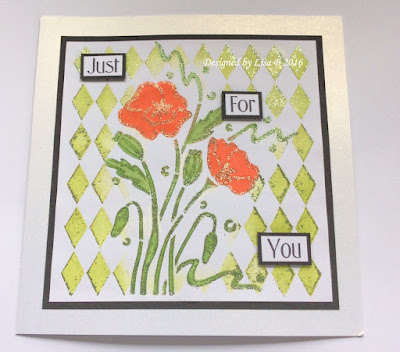 Well, if you are still with me and the tutorial has not been too long for you,
I thank you.....

I hope it has inspired you to have ago and play. I will be back soon with some more inspiration with my Poppy Stencil and hope that you can join me.....

Have a great week.