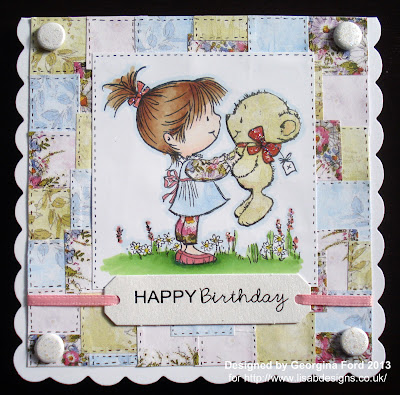 Hi! It's Georgina again with a new card to share with you. For this card I used the cute Emily and Ted cling stamp and Blackberry Lane 6x6 paper pad both by Wild Rose Studio, and available from Lisa B. Designs.
To make this card I started by stamping the image onto smooth white card and patterned paper with a Tuxedo Black Memento ink pad. I chose different patterned papers for different areas of the image. From the Blackberry Lane paper pad I chose a flower paper for the top and leggings, a pale blue paper for the dress and a green/brown paper for the teddy. 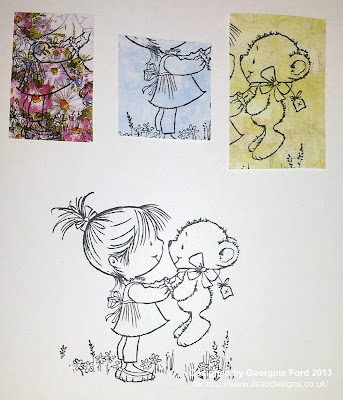 I coloured the hair and skin sections of the image with ProMakers. I then cut the other sections (dress, top, leggings and teddy) from the patterned paper and attached them to the coloured image. This technique is called Paper Piecing. I coloured teddy's bow with a red ProMarker. For added sparkle I added Star Dust glitter glue to the flowers and teddy's bow. 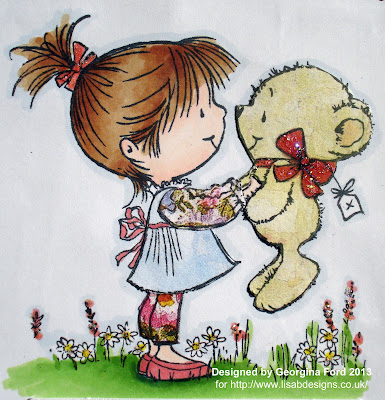 I then cut a piece 10.5 x 11cm of white card. I also cut a selection of 2x2cm squares of different patterned paper again from the Blackberry Lane paper pad. I added the small squares to the white card to form a patchwork effect. 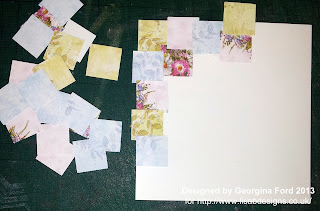 Once the patchwork was complete I added the coloured image onto it. Around the edges I added faux stitching with a black fineliner pen (as shown below). 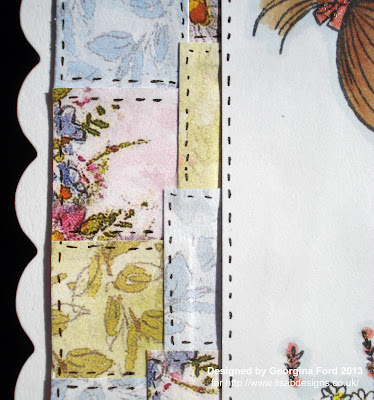 I punched two holes in a die cut sentiment. I thread pink ribbon through the holes before adding to the patchwork image panel. I then attached the completed panel to a 119x119mm white scalloped card blank. To finish the card I added white Card Candi, which I also added Star Dust glitter glue too. 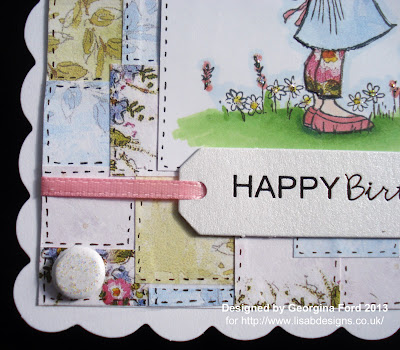