Good morning, blog visitors, it is yet another grey, miserable day.  I hate January.  However, I was working in the garden on Sunday & I saw LOTS of green shoots poking their way through the soil, which means of course, that Spring is on its way & that makes me happy.  Unless of course, we have snow & everything is killed off......

Let's not think about that.  Instead, let's think about Spring flowers & pastel colours, especially as this month's challenge is 'Spring'.  How about this card? 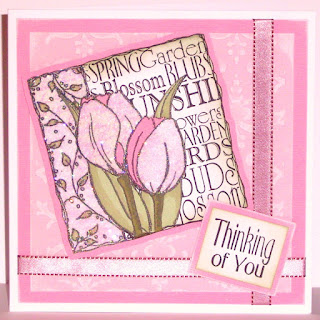 This was made by Lisa, using Imagination's Tulips decoupage stamp set.  The idea is that you stamp your base image, then stamp again onto a different surface & cut out various pieces, such as the petals & the vine border, to build up layers. 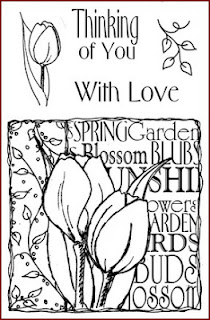 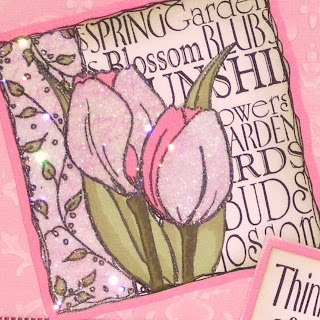 Here is a close-up.  Lisa coloured the tulips with Spectrum Noir pens.  When she cut out the petals, she attached them to double-sided adhesive - the coloured side on the adhesive - then peeled away the protective sheet, exposing the other sticky side & added clear glitter to that, meaning the coloured petal shows through the glitter.
What do you think?  Obviously, you can use lots of mediums to colour these images.  You can make a paint with mica powders, or with distress ink.  Watercolour pens work too  You could use a thin layer of glitter glue, or a glitter pen, if you want sparkle, but don't have any double-sided adhesive sheets.
There are TEN different sets in this range, including the very pretty butterfly & dragonfly sets & they all have 25% off at the moment.  Once they're sold, Lisa won't be getting any more, so if you like them, don't delay.
The details for the challenge are all HERE.  I've added another of Lisa's Imagination cards there too.
The SALE is continuing on the website.  Lisa has added dozens of products, including a great many cutting dies, at bargain prices.  They are selling out fast - in many cases, there's only one available - so if you see one you want, grab it.  They won't be restocked.
The January newsletter was sent out yesterday.  If you haven't received it, sign up on the website.  It contains the dates for this year's classes in Maidstone, they're also HERE.  February's class is full, but Lisa has got a reserve list, so you can request to go on that by emailing her at enquiries@lisabdesigns.co.uk
I spent some time with Lisa yesterday, making plans for future blog posts, amongst other things.  She is leaving for California later on, to attend CHA, the American Craft & Hobby Association trade show in Anaheim.  It's where all the American designers & craft companies launch their new products & we get to see what the new trends will be for 2013.  If any of you follow blogs such as Spellbinders or Tim Holtz, you'll have seen sneak peeks of some of their new products this past week.
Apparently, the Create & Craft tv channel will be broadcasting from CHA for the very first time, in the evenings over the weekend.  Keep an eye on their website, http://createandcraft.tv for all the info on that.  And if you're watching & see Lisa, ( I told her to wave madly, or jump up & down, lol), let us know via Facebook or Twitter.
We won't hear from Lisa while she is away, but I have made her promise to take LOTS of photos, so there'll be a blog post, or three, all about her adventures, next week.
I think that's all for now.  Thanks for your continuing support.  If you like what you see here & on the website, please spread the word among your crafting friends.
Until next time, happy crafting.
Kirsten.
Posted by Kirsten at Wednesday, January 09, 2013